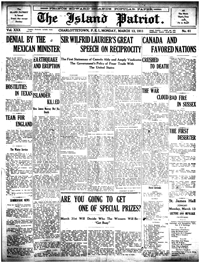 About Patriot
The Patriot began publication in 1864 as a Liberal newspaper. It was the successor to the Protestant and Evangelical Witness. During the late 1860s and early 1870s the Patriot opposed Confederation and the building of the railroad. Education was a frequent topic in the paper, with the Free School Act being endorsed. During the latter part of the 1870s, the Patriot fiercely attacked the Conservatives, opposing protectionism and tariffs. Fiction, news, poetry, and advertisements were all published in the Patriot during these early years. During the 1880s, political opinion took a less prominent role in the Patriot, with local, national and international news coverage taking precedence. Local reporting was particularly good, especially of meetings. In its editorials the Liberal Patriot denounced the National Plan, supporting reciprocity with the United States. In the 1890s, news coverage, including sporting events, the law courts and the House of Assembly, continued to be good. Editorial concerns included Tory corruption and overspending, education, the abolition of the Legislative Council, lower tariffs and lower taxes. The first decade of the twentieth century brought editorials which promoted the Liberal party. News coverage continued to be particularly good, and photographs and headlines began to appear. Between 1910 and 1919, editorials discussed agriculture, the war, the merits of reciprocity and a variety of local issues. During World War I, the Patriot only tentatively supported the Union Government. The 1920s saw the introduction of a number of new features in the Patriot. These included a sports page, comic strips, crossword puzzles and a women's page, which featured fashion and housekeeping. News coverage was excellent and editorials discussed education, taxation, government spending and temperance from a Liberal viewpoint. Photographs appeared only occasionally during this decade. Local news reporting declined in the Patriot during the 1930s, as did the amount of political commentary, although the paper did continue to support the Liberal party. Temperance, roads and Conservative overspending were all discussed in the paper's editorials. Photographs were featured in every issue, with portraits of famous people predominating. The Liberal bias of the Patriot completely disappeared during the 1940s. Editorials rarely dealt with politics, often promoting improvements for P.E.I, and dealing with the war and product shortages. Agricultural articles and political cartoons appeared occasionally during this decade. During the 1950s, the Patriot's editorials were generally politically nonpartisan, although a Liberal bias was occasionally expressed in them. International events and agriculture were often the subjects of editorials. Local photographs began to appear in the paper during this decade, and, at the end of the 1950s, a weekend magazine and coloured comics were added to the Patriot on Saturdays. In 1957, the Patriot Publishing Company was purchased by Thomson newspapers, following a fire which destroyed the Patriot plant. Provincial news came to predominate in the pages of the Patriot during the 1960s. Editorials continued to avoid controversy, and a wide variety of syndicated columns were printed. The subjects of these columns included federal politics, health, bridge, horoscopes and advice. Television listings were printed daily. During the 1970s and 1980s, the Patriot continued to publish very much unchanged. Editorials discussed current events, promoted Prince Edward Island and reviewed political developments. The Patriot is still being published today. Over the years, different editions of the Patriot have appeared alongside the evening daily. Between 1875 and 1909, the Weekly Patriot (see also) was published. It was succeeded by the Semi-Weekly Patriot which was published until 1913. A morning daily edition was published between 1913 and 1918. The last known issue of the Evening Patriot was published June 9, 1995.