Neil A. Matheson and "Across the Island": Reintroducing One of P.E.I.'s Most Popular Newspaper Columns

The islandnewspapers.ca team is pleased to present, in partnership with the family of the late Neil A. Matheson and The Guardian newspaper, an online collection of Mr. Matheson’s well-loved column from The Guardian, "Across the Island." This is the first in what we hope will be a series of virtual exhibits for islandnewspapers.ca, highlighting especially rich and interesting content from digitized Island newspapers.

About Neil A. Matheson

Neil Alexander Matheson was born in Rose Valley, Prince Edward Island in August,1904. He attended Prince of Wales College, where he was captain of the rugby team, and received his First Year Certificate in 1924. It seems to have been during his PWC days that the tall and athletic Matheson acquired the affectionately ironic nickname, “Tiny,” by which he is sometimes remembered even today. A volunteer fire fighter, he was a member of the Charlottetown Fire Department’s world record-setting Hose Reel team of 1925.

Matheson went on to attend Mount Allison University, where he remained a keen athlete, and was awarded a Bachelor of Arts degree. He returned to the Island shortly thereafter, and by the early 1930s was sports editor of The Patriot, and active in provincial sporting circles. Matheson competed successfully in rugby and track and field for some years, and was also a coach and organizer, serving on the provincial executive of several athletic associations for sports including softball, hockey, and rugby. Nor was Matheson’s service work confined to athletics: he was a Captain in the Reserve Army during the Second World War.

In addition to his journalism career, public service, and sporting pursuits, Matheson was also a farmer with a keen interest in agricultural practices and trends, and The Patriot named him “news and farm editor” in the early 1950s. He also served on the executive of the PEI Hereford Breeders Association during this period.

Matheson won election as a Liberal Party Member of Parliament for the Island constituency of Queens in August, 1953. He proved an active and engaged MP, sitting on several Parliamentary committees and successfully lobbying for a number of federal investments on the Island, including a new Wood Islands ferry and a new RCMP headquarters for Charlottetown. Despite this, Matheson was one of many Liberals to fall in the upset victory of John Diefenbaker’s Progressive Conservatives in the 1957 federal election, losing his seat to Heath MacQuarrie.

Matheson returned to his newspaper career after his exit from politics, and also continued to pursue a host of other interests: he served, for example, as president of the PEI Music Festival Association from 1958 - 1959. In the Fall of 1960, Matheson’s energetic and wide-ranging curiosity on numerous and varied topics led to a new project that would make him a household name in PEI: a weekly column in The Patriot and The Guardian newspapers1, entitled “Across the Island.” The column remained in print for nearly a dozen years thereafter, and attracted a devoted readership. “Across the Island” covered a wide range of Island-related topics and themes, but an appreciation of the province’s history was especially apparent throughout: it earned Matheson a Certificate of Commendation from the Association of State and Local History in October, 1963, and PEI Heritage Foundation director Catherine Hennessey would later observe that the column, “was very often the inspiration that resulted in valuable contributions to Island history.”

On the night of March 31st - April 1st, 1972, Matheson was on the late shift in The Guardian newsroom. After completing the work of laying out the news for the front page of next day’s paper, he turned his attention to his next “Across the Island” column, scheduled for Monday’s edition. Once the column was in the hands of the linotype operator, Matheson left for his home in Mount Stewart around 2 AM, but was involved in a traffic accident shortly thereafter: while presenting himself at the City Police station to report the incident, he suffered some sort of medical emergency, and died almost immediately. Matheson’s first wife, Margaret Miller, predeceased him in 1968: he was survived by his two daughters from that marriage, Margaret (Margaret Dawn) and Elizabeth (Betty Carol), and his second wife, Ella (nee Court). At the time of his death, he was chairman of the PEI Sports Hall of Fame, a post he had held since the Hall’s establishment in 1968.

The Guardian printed Matheson’s column, as planned, on Monday, April 3, alongside tributes from the provincial Minister of Agriculture, the National Farmers Union and the PEI Federation of Agriculture, the PEI Heritage Foundation, and his former political rival, Heath MacQuarrie, who observed: “As a journalist, sportsman and community leader, he earned widespread appreciation and regard.”

1 The Patriot was, by this time, effectively an evening sister newspaper to its former rival, the morning Guardian, a trend accelerated in 1957 by the destruction of The Patriot building in a fire, followed shortly thereafter by the acquisition of the The Patriot by the Thomson newspaper chain, which already owned The Guardian. “Across the Island,” then, originally appeared in both newspapers, though it seems to have become a Guardian-only offering in its later years.

Thank you to Neil A. Matheson's daughters, Margaret N. Dawn Matheson and Elizabeth C.A. Crelling, who painstakingly and lovingly transcribed their father's columns, and then gifted these transcripts to the UPEI Robertson Library in 2014. Ms. Matheson and Ms. Crelling also created a number of thematic / topical folders used in this exhibit, and provided a photograph of their father, along with valuable input on the biographical sketch.

The introductory notes and biographical sketch for this exhibit were written by Simon Lloyd, University Archivist and Special Collections Librarian, who also drafted the original site plan. Extensive work indexing and sorting the transcript files for online display was done by Rosie LeFaive, Systems Librarian, and Keltie Macphail, Digital Initiatives Librarian; Keltie also managed the student experiential learning project in January - February 2020 that finally carried this digital exhibit to completion. The Library thanks UPEI History student Tamara Wight for her work on this placement project, and Dr. G. Edward ("Ed") MacDonald, UPEI Department of History, for arranging this placement as part of his HIST 4820 (Applied Public History) course.

The exhibit was officially launched February 27, 2020 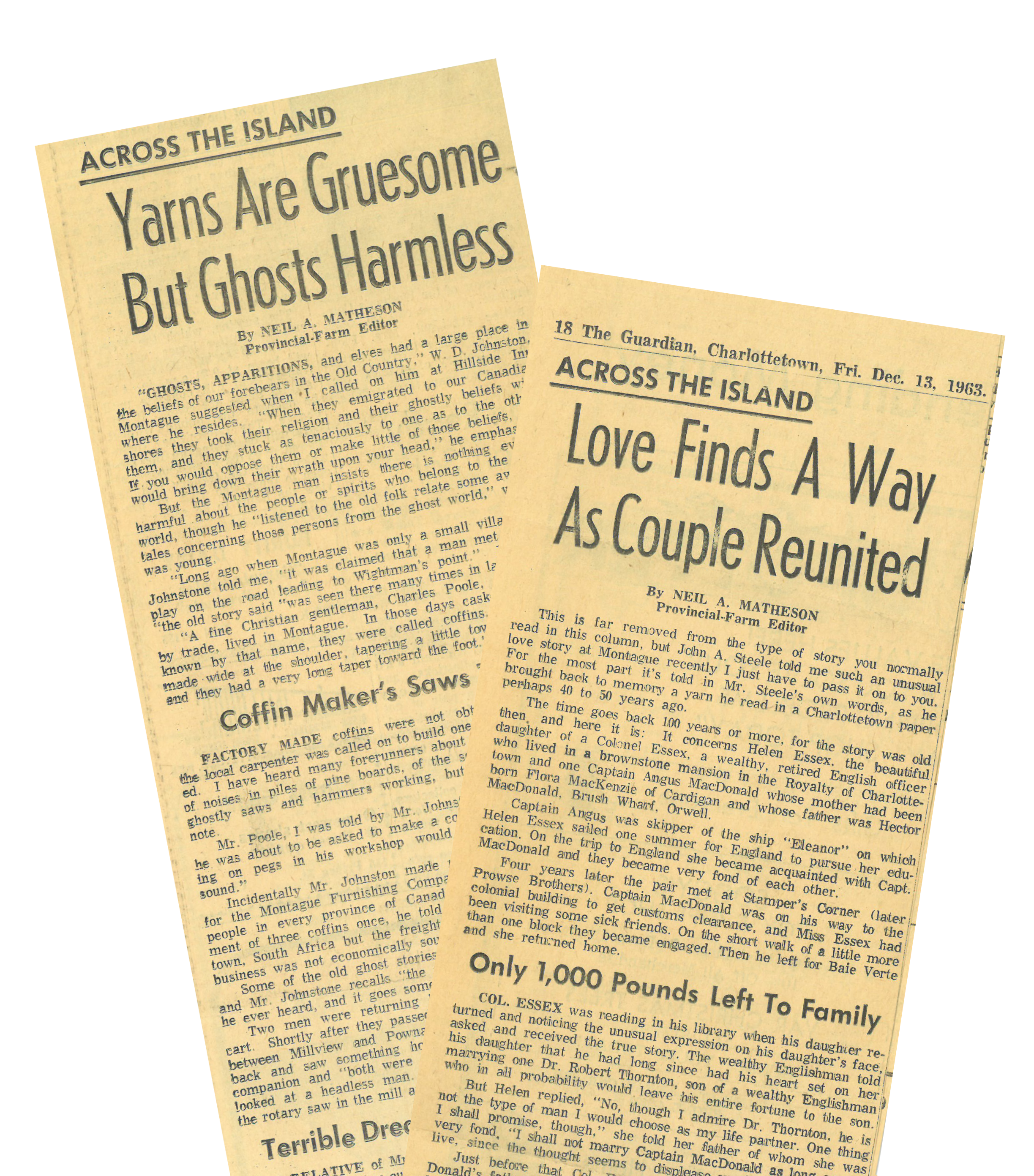 Browse "Across the Island" by Year

Browse "Across the Island" by Theme